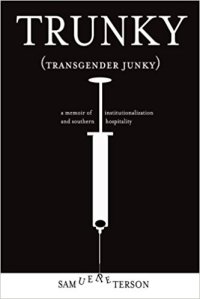 After a decade of sobriety and relentless devotion to becoming a writer, Trunky finally finds himself on the brink of success and widespread acclaim. Instead, he spirals down into depression and begins using heroin again, winding up institutionalized in a recovery center in the south among a diverse group of dopers–thugs, criminals, white supremacists, professional athletes and business men–all of whom are looking for something they’re terrified of finding. As Trunky navigates his path from addition to recovery and female to manhood in this cast of characters, he find himself on an unexpected journey into the depths of the human soul where he discovers its fundamental flaws and the redemption we experience from honest vulnerability when we have the courage to go there.

Sam Peterson is an artist/writer/performer who was published in Kate Bornstein’s and S Bear Bergman’s seminal redux, “Gender Outlaws—The Next Generation.” He and director Joseph Megel created a one-person memoir about transition with testosterone called “F to M to Octopus.” Peterson opened for Suicide, the Bush Tetras, and X at DC’s 9:30 Club in the 80s; tattooed and performed queer blood-brother rituals at Julie Tolentino’s Clit Club, Dagger, and Tattooed Love Child in the NYC 90’s; produced drag shows and taught feminist porn in Austin in the aughts; and toured with Liz Belile’s Gynomite. He currently lives in Durham, NC, praying for mercy and peace and light. And chromatophores.

Why You Should Read This Book

“The men I met in Butner, NC (in rehab) were all suffering from the impact of gender trauma. To a man they had experienced some form of radical violence, alienation, isolation; most had prison and/or jail time; all of us suffered the self-imposed loathing from the shame of not being able to live up to a construct no-one can embody without causing a deep soul-shattering  divide. Add drug and alcohol addiction to those conditions, and it’s a miracle any of us recover.” —Samuel Peterson

Buy it from your local bookstore, Barnes & Noble, or Amazon.

Want to donate the book to your local library? Find the library here.

Join 350 other subscribers
Follow Books Are Not A Luxury on WordPress.com